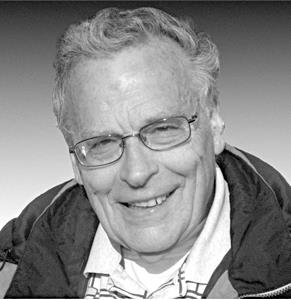 Father Jack Sproule died peacefully in his sleep at the Dwelling Place, in Nanaimo, BC on February 18th 2016 after some years of declining health. On this page can be found Jock McKeen’s eulogy, a link to the funeral program and a reflection written by Father Jack.

Robert John (Jack) Sproule was one of the best and loyal friends I have had in my life. My deceased partner Bennet Wong and I explored with Jack in wide ranging discussions; traveled together, we taught together, and shared many personal moments. He was my comrade, my priest, my confessor, my rebellious compatriot, my ally, my study buddy, my source for ecumenical spiritual studies. He was also an inveterate trickster and troublemaker and gadfly.  He enjoyed laughing at himself, and always came up on the human side of things.

He resisted succumbing to the role of priest/confessor, preferring to be a counsellor and spiritual guide. His approach was pragmatic and human. At Sunday Mass, he played his role as priest, then came down off the altar into the audience, and invited dialogue by asking, “That’s what I had to say. What do you want to say?”

He was genuinely concerned with the lives and souls of those he knew. Like his great friend Ben, Jack was the best kind of professional, learned and scholarly, but working so effortlessly that he always seemed like a companion having a casual interaction. He was available to share his own personal feelings, all the while maintaining the dignity and professionalism of his office as a parish priest. His spiritual guidance came with a healthy dose of laughter and food and fun.

As a young man searching for meaning, he was rejected by his staunchly protestant family because he chose the Roman Catholic Church, and he had to leave his family home. His mother, who was the dedicated chairwoman of the Protestant Women’s League, would only meet him in coffee shops, and his father refused to see him at all. Rejected by his own mother, he joined the mother church, probably seeking some kind of security he missed. Cast out by his own father, he became Father Jack to many. Once in the Roman Catholic Church, he continued to question, making him a challenge for those in authority. As he grew in his understanding, his philosophy and theology were more clearly human centred. Thus, he welcomed the approaches from Vatican II, and his work increasingly included social justice concerns.  He always would advocate for the oppressed or the marginalized or the disadvantaged.

Jack cared about people. He accepted them as they were. He sometimes shocked his fellow clergy when he would counsel people to think for themselves, to find their own personal truth rather than just following conventional dogma. The personal always trumped the “rule” for Jack. He was especially attracted to other questioning souls. Jack liked people who were artistic, or unusual, or who challenged the status quo. He was not a rebel for the sake of revolt; Jack had a sense when people wanted to go more deeply into life, and he was tireless in uncovering life energy and encouraging people to express their deeper nature, even when they were defying social conventions.

Jack was interested in growth, and evolution, in learning. He was impatient with those who wanted to sweep things under the rug, or hide in self-importance.  So, for some of us, Jack was at times a big critic. If we puffed ourselves up, he was dedicated to popping our balloon of self-aggrandizement. But he gave his feedback with honesty, personal responsibility, and caring.

Jack believed in the worth of each person. So, he rejected “us and them” clubs or organizations or elitist social structures. He himself resisted being reduced to a category. When someone wanted to objectify him into the role of priest, he was a devil in showing his unpriestly aspects. When someone wanted a wise healer, he showed us how common and ordinary were his own foibles and neuroses. He always stepped outside of what was reduced. When someone asked him to hear a confession, he would reply, “Yes, I will hear your confession, if you will hear mine.” His longtime friend Leanne McIntosh wrote:

Jack didn’t hear confessions, he practiced reconciliation. Jack was generous with what he had learned and he spoke fearlessly from his point of view. Confession/reconciliation was a dialogue often ending with Jack saying, “what can we do about it?” Asking the question, not giving an answer (so Rilke-esque).

To Jack, the circle expressed the oneness, the union of all. Thus he told us repeatedly that meeting in circle as we did at Haven expressed the “true church.” He resisted separation of human and the divine. He liked the version of Jesus depicted in the gnostic gospels, who maintained that spirit is everywhere, with no part more important than another. Human community, the “church” was the fabric of expression of spirit; Jack would say, “Jesus did not bring the Kingdom, rather the Kingdom brought Jesus.” He liked the words from the Dutch catechism, “We don’t so much pray TO the holy spirit, as IN the holy spirit.” Leanne McIntosh writes:

I wonder how many people who heard and read that line realize how radical it is? He turns Christianity upside down. God/Jesus etc. emerge from community/gatherings of people, come from the imagination, the dream time of humanity. Rather than God catapulting Jesus (one of Jack’s favorite words) into community.

Paul Reps was a Zen master who lived with us at Haven.  His approach was remarkably compatible with Jack’s. Reps wrote:

There is a
paradise
on earth
It is in
us

Jack kept and nurtured his friendships. Jack rarely said “I love you.” Instead he told people what they meant to him, in a personal way. Leanne writes about Jack:

Jack didn’t limit the sacramental life to buildings or rubrics. So church was the circle and the work at the center. Eucharist was Christmas dinner with Trish and Mary at Butchart Gardens, Confession (or reconciliation) happened with a talk at the beach, conversation over coffee in a shop, a discussion about books because confession/reconciliation was, I believe for Jack, a call into friendship and in that moment of mutuality Jack dislodged power and became friend. As it says in the Gospel of John, “I call you friends because I have made known to you everything I have learnt…” (Jerusalem Bible, John 15:15)

Jack was remarkable in his way of being a friend who really got to know YOU.  And as he got to know you, you got to know him. He would meet you as you were, where you were. So, in a way, a different aspect of Jack came to bear upon each person he met and knew. As we shared together at his memorial service, there were many people from different walks of life. Each of us had distinct memories and warm stories to share about our connections with Jack. He lived a truly Christian life. He lived as I understand Jesus did, amongst the people, talking, eating, laughing, walking, caring, cajoling, questioning. Leslie Pinder, another longtime friend of Jack’s, wrote in a poem for the 25th anniversary of his ordination as a priest:

You declared church in our midst
The verb of it, the right now of it,
Here, god now, the verb

Jack, we miss you as we knew you.  But we feel ourselves fuller for knowing you, and that fullness can continue to grow as we relate with each other.  You would have liked that.

Read the program for the Celebration of Life (PDF) for Father Jack Sproule.

I am very much interested in the possible need for a new conception of God, the experience of the Divine in Canada as we approach the year 2000.

I experience the “God I was trained in”: the deterministic, self contained, dominative God, the one pathway God, the powerful God who controls from outside, in fact the authoritative outsider, supreme God who is to be served…I experience that concept of God as too flat and one dimensional…not multidimensional like the Greek gods were and that were interesting. I am not much interested in linear thinking. I like lateral thinking. I believe the notion of God is meant to connect me, and the common Christian language and images do not do it.

I never did make much sense out of the mechanistic model of religion, church, government, teaching, etc. but I am discovering myself now and I am evolving myself into a wholistic paradigm.

No longer do I find adequate a conception of a God “out-there”, a God of isolation, unrelated, autonomous. I am interested in the “Divine energy” as continually interrelating, an energy of interdependence and cooperation, one of unfolding processes, not an image of a static world view.

I believe change is real and that growth depends on it. I believe that progress is evolutionary, cyclic in nature, that all is meant to exist and grow in mutual interdependence. I believe nothing can be fully understood in isolation. I make a distinction between religion, faith and spirituality.

I also believe that Jesus did not bring the Kingdom, rather the Kingdom brought Jesus—although I realize that this is still Christian language. However I also realize that I am concerned with the whole of life, especially the human realm.

I am interested in and, I think, I help people birth spiritual values, not necessarily religious behavior. I am not concerned about getting people into church but about getting the church into the world, however only if the church is working toward letting go of power and control tactics, security, walls, roles, black and white moralities, pride, submission, obligations, taking care of others, reaction, blame, guilt…only if the church is interested in cooperating with all sorts of peoples in healing the whole person and the whole planet.

These beliefs invite me into life, into relationships with people, into revelations. Into seeing the possibilities of good religion that calls people into generosity, courage, faith and hope. 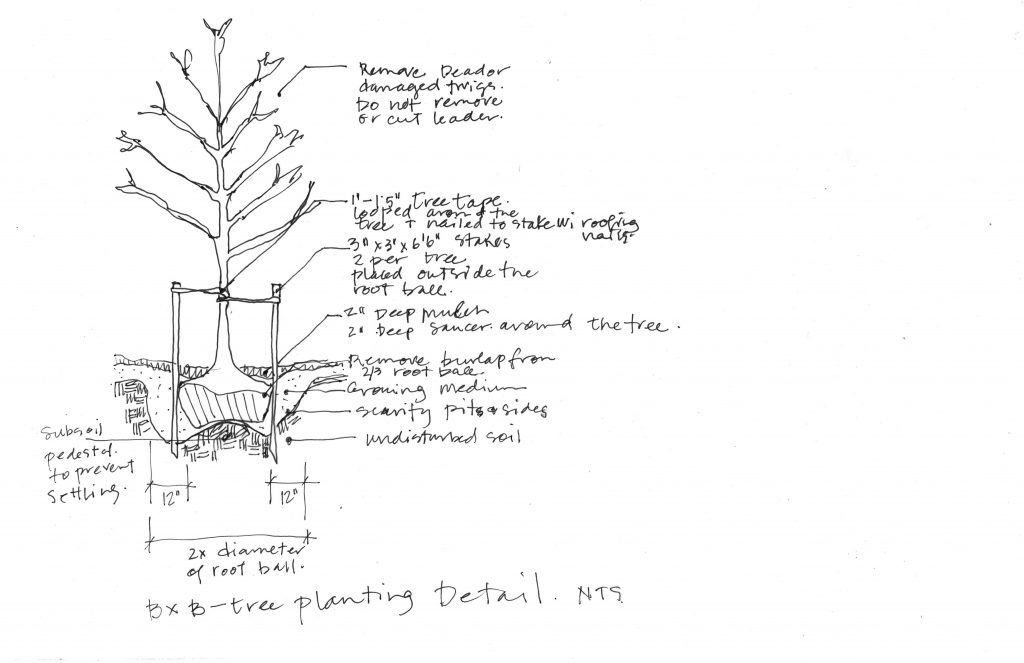 By Rachel Davey This week an exciting project is underway in the Haven grounds. We were very fortunate at the end of 2015 to receive a generous donation from Scott… 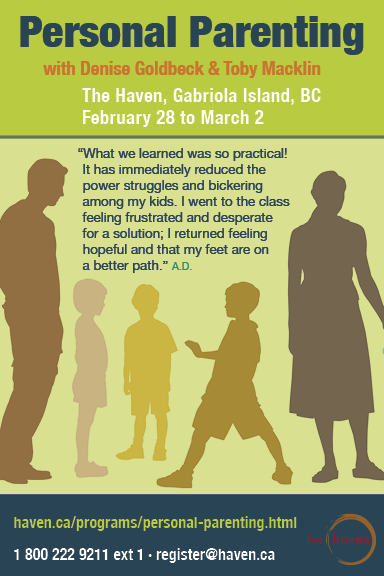 By Denise Goldbeck.  This article gives a taste of the kind of thing you can expect in Personal Parenting with Denise and Toby Macklin at The Haven Feb 28-March 2. Good…

The Haven stands in solidarity with Black Lives Matter and the struggle against systemic racism, police brutality, and all forms of abuse. We want to express our profound…

Rachel Davey writes: It’s here! The 2015 Video Annual Report for The Haven. Thanks to everyone who took part in the video and to all Haven friends out… 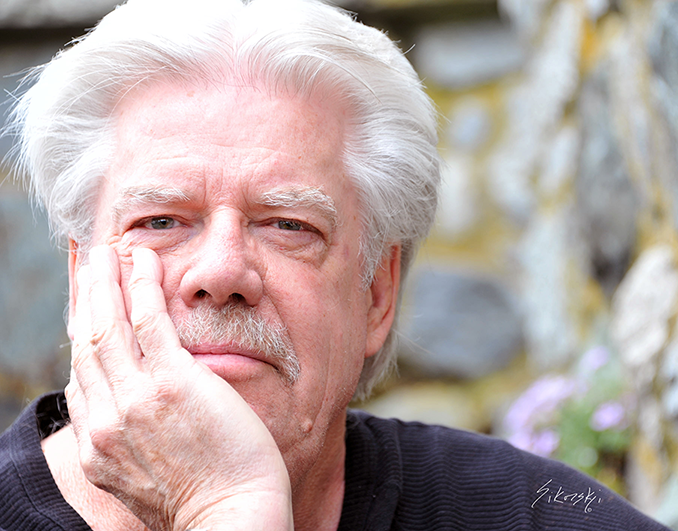